Introduction to the Yamaha YDP 184

The Arius keyboard series from Yamaha is one of their most successful. We have witnessed great instruments from this series; instruments that came with professional features that have helped experienced pianists in creating excellent music. The Yamaha YDP 184 is another incredible addition to this series. This remarkable equipment is fitted with everything necessary to move your music career to the next level.

Here is everything you need to know about this fantastic device.

One of the biggest reasons behind the popularity of the Arius series keyboards is their acoustic sounds. These keyboards carry the best acoustic sounds in the most compact way. The Yamaha YDP 184 carries on this legacy. In fact, we believe that the piano produces acoustic sounds bigger than the ones found in other more expensive digital pianos. But guess what; this keyboard isn’t even as big as a wall piano! Yes, Yamaha YDP-184 has a compact design that allows it to effortlessly blend into your home, studio, church or even live performances. 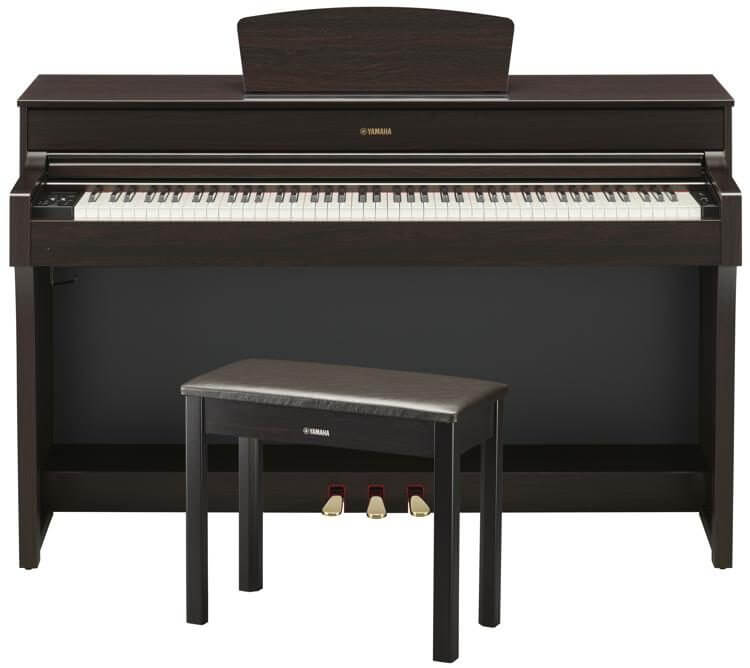 With the Yamaha YDP 184, you’ll never run out of voices to play with. There are dozens of different voices and sounds here all of which have been recorded using high-quality instruments. The voices have also been digitally enhanced to polish the final output.

What steals the show, however, is the CFX Premium Grand Piano voice. This acoustic sound was recorded from the Yamaha CFIIIS Concert Grand Piano. If you know anything about grand pianos, then you know that the CFIIIS is up there among the best concert grand pianos ever made. The keyboard has been used in some of the most prestigious concerts by the best pianists worldwide. The recorded voices have then been enhanced using Virtual Resonance Modeling. This tool together with two microphones made it possible for the manufacturers to record every note at different levels.

In summary, Yamaha YDP 184 arguably houses the best grand piano voice you’d find in any digital piano out there.

Yamaha has used synthetic ivory in making the keys for this keyboard. They are also designed with Graded Hammer 3 Action (GH3) to enhance their responsiveness. We tried out these keys and the GH3 designing worked really well. With this feature, playing the keyboard feels a lot more like a grand piano. This is great news to everyone using this keyboard as a training ground before performing on a grand piano. The experience will make sure that you easily and quickly adapt to any grand piano you get your hands on.

The keys are further finished with a material that prevents moisture accumulation on the surface. You will, therefore, be able to spend as much time as you want on the keyboard without having to deal with slippery notes.

In general, we found the keyboard very easy to play and learn on. All the keys are adequately spaced to prevent plucking the wrong notes. Both beginners and experienced pianist will enjoy using this keyboard.

Unlike most other keyboards whose screens are usually located at the center, the Yamaha YDP 184 has its screen pushed on the left side of the keys. This may take some time getting used to but once you do, using it will feel very easy. It is well lit and easy to read showing you the various features within the keyboard. Below the screen are a few buttons and knobs for navigating through different settings. You can even go through the features and functions in real time without interfering with your current play.

The Yamah YDP 184 also allows you to record your sessions and export them to a computer for further enhancements. The keyboard is fitted with a software that supports built-in recording and hence you’ll never need to have your computer plugged into the piano every time you are recording. With this feature, you can also pause the record, rewind it and play over it with additional sounds. You’ll also be able to play back the recording to see how well you did. You’ll have so much fun with this feature.

Yamaha YDP184 supports two-track recordings at the same time. You can, hence, have each of your hands make its own track simultaneously. We found this feature very useful especially during re-recording and making track playbacks.

Yamaha YDP 184 comes with a USB port that you can use to connect the keyboard to a smartphone. It’s important to note that its software supports both Android and iOS devices. This means that you can use this piano with different music applications from all kinds of smartphones to improve your music.

Through the USB port, you’ll also be able to export and store your music in digital form. This saves you lots of space and money.

There is also a 1/4” audio jack that comes in handy especially when you are using this keyboard at home and you want to practice early in the morning without bothering anyone. The jack transmits excellent sounds replicating the great performance of the keyboard. When you want to go all out, the built-in speakers are fine-tuned to produce high-quality tones and sharp notes and chords. If the speakers aren’t enough then you can also connect the keyboard to external speakers or a studio set using the stereo inputs.

Yamaha YDP-184 can be connected with any computer, mixer and music accessory as long as the software is compatible. Its versatility makes it ideal not just for home use but also in a studio setting.

The Yamaha YDP 184 is designed with the following three pedals:

What does it come with?

The Yamaha YDP 184 comes packed with a power supply, padded leather bench, a book of sheet music and a music stand. These should get you started as soon as you receive the piano.

The Yamaha YDP 184 is a great keyboard for beginners and experienced pianists alike. The sound quality of this keyboard is on a whole new level. For any beginner, this keyboard will help you in mastering various tricks and it’ll grow with you as your playing skills improve. This means that it’ll always challenge you to do better while saving you from having to invest in a new unit as you gain more experience. For the pros, YDP-184 has already helped dozens of musicians in doing both studio recording and live performances. There is, therefore, no doubt that Yamaha YDP-184 is absolutely worth spending on.