Introduction to the Yamaha DGX-660

Click the image for best price on Yamaha DGX 660: 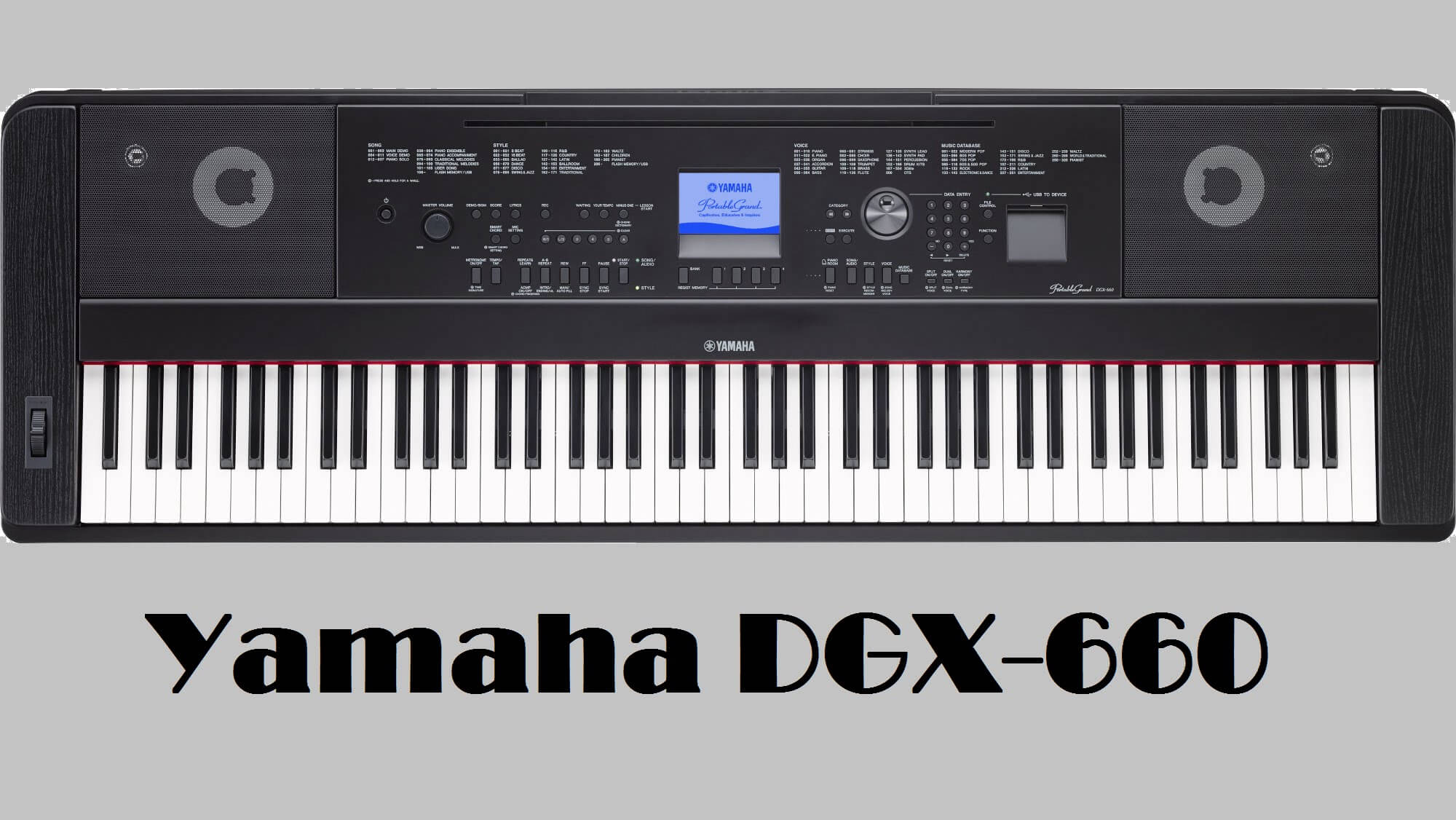 From professional pianists or just avid pianists in general, the type of piano to purchase is an important consideration. There are a lot of factors to consider in terms of choosing which instrument is suitable enough for the pianist. For a beginner, it is wise to invest in the instrument that provides the best learning experience and creates the opportunity for expansion. Among the lists of many different brands out there, there is one that stands out: the Yamaha DGX 660. The Yamaha DGX 660 is a digital piano and falls within the middle range, in terms of affordability. It mimics the sound of an acoustic piano, which is the most expensive, as the digital piano can mimic the sound of an acoustic piano. But is it a wise investment?

Features of the Yamaha DGX-660

The quality of sound is an important determining factor when choosing an instrument. As they say, there is a difference between music and noise. Music is beautiful to the ears; it has the magical ability to evoke emotions. Noise, on the other hand, is irritating to the ears and is actively avoided. Similarly, when choosing an instrument, one would want to make music, not noise. The Yamaha DGX 660 is a portable device and has in-built high-quality speakers. With this, it is able to produce sounds with a lot of detail even if the output is small. Concert grand piano sound is promised and it delivers greatly. This piano has fantastic sound and you will swear you are playing a real acoustic with the right settings.

Details can determine the nuances and subtleties of the music. It is through the details that an instrument can blend and harmonize with other instruments. The Yamaha DGX 660 contains a sound that is clean and clear and has the ability to pick up and produce sounds in a way that the user can determine. Gifted with this sound capacity, the instrument has a certain versatility as it is capable of being used with the user’s preferred genre. The user is also afforded a great control of its responsiveness strength, so the learning experience is enhanced as well as providing a certain enjoyment from the user’s perspective.

Armed with an 88-key weighted hammer action, there is a richness in Yamaha DGX 660 as it contains a system called, “graded hammer standard” or GHS, so that it produces a similarity to how an acoustic piano feels. With this feature, the aspiring pianist will be able to build the proper finger technique as the instrument replicates the capabilities of an acoustic piano. Finger strength can be developed through the GHS and is a convenient way to practice.

While the acoustic piano affords the highest level of performance, this instrument is capable of replicating the sound of the acoustic piano, so that practicing becomes more efficient and can still induce learning. The keyboard feel is also sufficient enough that the higher note keys are lighter compared to the lower note keys. The instrument is capable of producing an intensity of the sound and the Yamaha DGX-660 can evoke the feeling that makes practicing as enjoyable as one’s actual performance. It is a great instrument to use for dry runs.

Another convenience by Yamaha is the variety of Apps that can be downloaded to one’s mobile phone that can be compatible with the Yamaha DGX 660. Being able to connect the instrument to the mobile device makes it convenient for the user, so that he may use this technological quirk as a means to expand his creative repertoire. Having this kind of connection enables the features of Yamaha DGX 660 to be enjoyed to its fullest extent to stimulate creativity. Features such as the Damper Resonance is capable of reproducing the sympathetic vibration that would enable the instrument to replicate the sound of an acoustic piano.

On the instrument itself, the Yamaha DGX 660 also has a LED screen which makes it easier to use and elicits a more “fun” feeling. This is highly convenient if the player is a beginner as it is less likely to cause frustrations when familiarizing oneself with the instrument. As it was mentioned before, the Yamaha DGX 660 is a versatile instrument containing two modes where it could be played as either a piano or an organ. Playing with these features, there is also an added complexity as the device shows the capabilities of playing both modes simultaneously to produce novel and interesting sounds.

To make things even more interesting, there are two additional modes available for the Yamaha DGX-660: the Split Mode and the Duet mode. The Split Mode is an interestingly fun feature that allows the user to “split” the keyboard and play two different instruments at the same time. For the dexterous pianist, one can play the two different instruments using each hand. This feature allows the user to experiment with different sounds and settings which makes playing more fulfilling. This feature can also be a great component to stimulate creative thinking. On the other hand, the Duet Mode is especially more convenient for a beginner as this mode increases the efficiency of the instrument by splitting the keyboard into two identical halves, making it act as if a separate keyboard. This feature allows the beginner to familiarize himself with the instrument and to toy with the features and discovery possible combinations that one can learn in the process.

It contains a microphone input on the control panel so that the user can adjust the microphone level according to his liking, in a way that fits best to where he is. It is customizable to the location of the user as it offers choices about the aspects of its sound or touch by adjusting the tuning or sensitivity. Adding to its versatility, the Yamaha DGX-660 has a smart feature called the “style recommender” which analyses a certain style that a user is playing and automatically matches a backup band that would blend well with the style of the user’s choice. The style recommender is able to recognize the type of genre that one is playing and mimic the user’s style. This makes the instrument adaptable to situations such as open mic or jamming sessions.

It is also quite notable to mention, that the producer of the Yamaha DGX 660, Pure CF Sound Engine has a piano-making history of creating state-of-the-art sampling technology and possesses the piano expertise which enables the Yamaha DGX-660 to produce a “world-class concert grand piano sound.” Yamaha has a long-standing career as an industry leader in the piano technology which expresses great dynamics and full expressiveness in their products.

Lastly, the physical built of the Yamaha DGX 660 puts it into the slight “heavier” side, but assistance can be easily provided and does not require too much effort, enough for it to still be portable. The instrument comes in a stylish color of black. Though the assembly may take some effort, referral to the manual can make the assembly of the Yamaha DGX 660 doable to the individual. On the positive note, to make up for its heaviness, the instrument does not break easily provided that the user does not make traveling too rigorous. All in all, the Yamaha DGX 660 is an attractive choice for an aspiring pianist, especially during the stages of practice as it is a fun and leisurely instrument to play.

For additional information: what are the advantages of a digital piano over an acoustic piano? It is well known that acoustic pianos are the priciest among the three types of piano. They are also the most widely-used by professional pianists. However, they do come with a disadvantage, such as the lack of portability.

Notable advantages of a digital piano include the ability to plug in a headset so that a beginner may be able to practice in peace and is unlikely to disturb others. Digital instruments also have the luxury of being able to be synced and connected to a computer and can be enhanced by different kinds of software, be it educational or musical. Digital pianos also do not need to be maintained and to be kept in tune. And the biggest advantage is its portability.

While it cannot be denied that acoustic pianos still have the highest qualities, they may take up too much space and too expensive. For a beginner or for a piano player who plays for leisure, the digital piano is the most practical investment. The quality of practice is still available and if in the future, a beginner turns into a serious pianist, then the acoustic piano can make that statement. Still, a good quality digital piano such as the Yamaha DGX 660 opens up the opportunity for an aspiring pianist to develop his skills with its built-in versatility as he strives for better musicianship.

The Yamaha DGX 660 is a brand that showcases its versatility and makes learning the instrument a fun activity. It is also a great instrument to use when jamming, sharing and interacting with others, building friendships and creating and personalizing one’s own style. Music is a way of life; it is meant to be shared with others. It is a good choice for an avid learner and those who like to play piano for pleasure.