The Akai mpk mini mk2 is meant for that musician or producer that’s always on the move. This laptop is only a few inches bigger than a typical laptop. It can swiftly slide into a backpack, and it’s also reasonably light ensuring that you can conveniently travel anywhere with it. Convenience, can however only go so far when choosing a production keyboard. A keyboard can be the most convenient but if it’s not packed with the right features then what’s the point of carrying it around? In as much as we want a lightweight keyboard, we still can’t trade it all for a somewhat bogus item regarding specs. So, how good is this Akai instrument regarding performance? How does it compare to other “laptop production keyboards” within its price range? 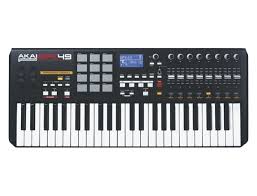 A quick glance at this instrument shows a mild resemblance to other larger production keyboard except this one has its functions compressed into a small scale. To save on space, you will also notice that several function buttons have been omitted. For instance, there is no LED display, modulation wheels, and the pitch bend. This is perhaps the price for making a compact instrument, and we will learn how much this has affected the performance of the entire keyboard.

What’s present is eight assignable knobs similar to ones in big MPKs and a few drum pads. The keyboard’s velocity sensitive percussion pads are thick with heavy-duty rubber. They are black and translucent at the sides allowing the backlights to appear every time a pad is struck. The entire unit is small, but the pads are big enough for comfortable playing. This also eliminates the chances of hitting the wrong pad by mistake. Two index fingers can fit on a single pad which makes playing simple “rolls” possible. The mini MKII is made with cost-saving materials. This is why the pads are also not of the same quality as the ones you’d find in larger MPK controllers. They, however, still get the job well-done. In fact, they are arguably better than some of the pads in larger controllers that are more costly than the Mini MKII. The only people who may find these pads limiting is individuals who are already used to high-quality MPK controller pads.

The rest of the buttons in this instrument are made of the same material as the percussion pads. They are also fitted with a backlight making it easy for you to use even when you’re performing in darkness.

The knobs, on the other hand, are pretty standard pots. You won’t find any endless rotary encoders here. Their caps are also made of some plastic that is embossed with ridged patterns but it somehow still feels slippery. Another problem with the knobs is how short they are. They are barely a centimeter above the top panel which makes it difficult to hold and control. Some people may, however, look at this as an advantage as it prevents them from getting damaged because they are also not as sturdy as you may want. One major drawback with a compactly designed controller is that at some point some function buttons are always going to end being too close together. This problem becomes a reality when handling the knobs. They are all so close which makes it difficult to tweak two parameters simultaneously. The best way to do this would be to assign the parameters in distant knobs.

Getting this controller ready to use is very simple. It’s a plug-and-play keyboard that doesn’t need any special drivers to start working. The keyboard supports both Mac and Windows operating systems and comes packed with software patch editor. The manufacturer hasn’t specified any minimum system requirements, but we believe the keyboard should be able to function properly with any recent pc.

A USB powers the Akai mpk mini mk2. You can either use the standard flat A-type or the mini B-type USB with your computer. The Akai mpk mini mk2 is supplied with the connecting USB cable, and hence you don’t have to dig into your pockets to purchase one. You’ll also notice that there isn’t any power button. The controller will automatically go on as soon as it’s plugged into a power source. You can use the provided manual to learn more about the installation disc and getting started with using the Akai mpk mini mk2.

You can store four presets each for the parameters assigned to the controls, e.g., Program change messages, MIDI CCs, etc. The controller also allows you to create new presets or edit the existing ones using the supplied software editor. A software editor is a handy tool that will also help you understand how settings are made and adjusted. The software has a nice touch of visual representations that make following the given instructions a lot simpler. You can load and save presets to your computer and send the same from your computer to the keyboard through a USB cable.

The buttons at the top panel are used for changing the drum pad’s modes. You can, for instance, use the Pad Bank 1 and Pad Bank 2 to switch between two banks of the assigned MIDI notes that are used to trigger samples and other sounds. Activating the “Prog change” gives you access to two banks of the eight continuous controllers. It’s also possible to adjust the behavior of pads where you can choose between Toggle (it turns the pads into an on/off switch) and Momentary (regular drum pad mode).

The Akai mpk mini mk2 is designed with an inbuilt arpeggiator that is controlled using a pair of buttons on the control panel. One of the buttons is for switching the arpeggiator on and off while the other allows you to control its tempo. Several different arpeggiator settings are possible, but they can only be accessed through the software editor. You can set the arpeggiator to use the programmed internal clock, or you can synchronize it with external sources. MKII’s arpeggiator produces patterns in different modes: Up, i.e. notes are made from the lowest towards the highest; Down i.e. notes moving from highest to lowest; inclusive the notes move from lowest to highest before restarting and with the highest and lowest notes being retriggered at the end of each run; Exclusive which is the same as inclusive except the lowest and highest points are never retriggered; order, i.e., notes play in the order that you played them on the keyboard; random representing random sequence.

Below the arpeggiator controls are two additional buttons with one of them labeled “Sustain.”  This functions as a sustain pedal. Hold this button down and any notes played will be sustained indefinitely until you release the button. The button latches the arpeggiator when it’s active which will make any patterns of notes played to continue running until the button is released. The other button is named “Program.” This is used with any of the four keys at the very top of the keyboard to switch between the four presets of the keyboard.

“I’ve been using the Akai mpk mini mk2 for around a month now, and I like it so far! I’ve been on the search for a portable MIDI keyboard that I can easily set up and put away as needed, and this fit the bill perfectly.

The build quality is really good. It feels like it’s made of sturdy material and is a quality product. Nothing feels fragile like it’s going to fall off. It feels very well made.” By Edward B

“This is a great piece of equipment for a beginner musician, but there IS a learning curve, so please be aware of that when buying. It’s just a tool to control computer software.” By Chelcee

The Akai mpk mini mk2 is among the few keyboard controllers that offer decent options regarding flexibility and functionality. The presence of an arpeggiator is also a great bonus considering its size and price range. It, however, also has several drawbacks which include the miniature keyboard. The absence of modulation wheels and pitch-bend will also be frustrating to various users. Additionally, I think the assignable knobs needed a significant improvement regarding their height and texture to reduce their slippery nature.

The best part of the keyboard is its drum pads. They are extremely playable and sturdy which consequently makes the entire device ideal for a player whose priority is drum and percussion programming. It’s an affordable and portable option that competing controllers just can’t match.